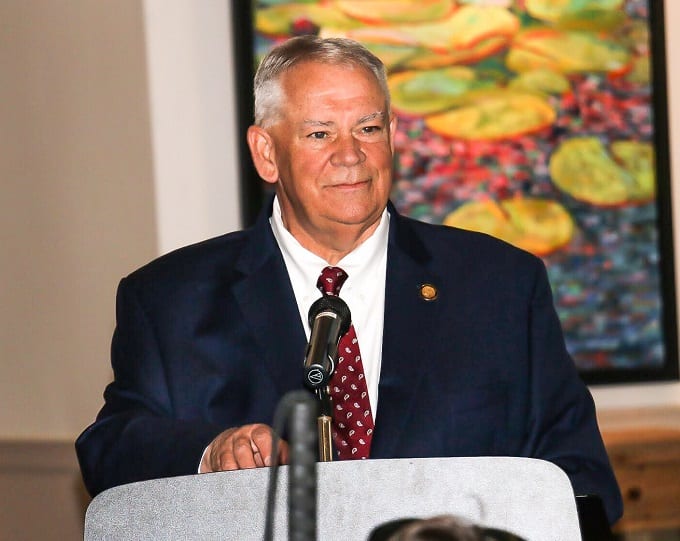 ATLANTA, Ga – After announcing his support of extending the Public Health State of Emergency through May 13, House Speaker David Ralston has again asked Secretary of State Brad Raffensperger (R) to move the Georgia Primary to June 16.

Ralston has been very vocal about moving the election until Georgia can overcome the COVID-19 outbreak, which has a death rate in Georgia of 3.65 percent.

“We have seen many reports recently about how impactful a May 19 primary will be on the
ability of poll workers to report. Paramount is the health of voters, poll workers and others who
must be at polling precincts on Election Day,” stated Ralston in the letter. 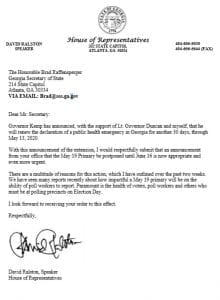 Copy of the April 8 letter.

In the letter, Ralston asserts that he would like the primary to be moved to a date of June 23 or later. He cites several other southern states that have already moved their May Primaries to June or July as a precautionary measure to keep the public safe.

An exert from the letter below:

“At the present time, our state, the entire nation and the world are confronted by a public health emergency of unprecedented magnitude.

Our prayer is that we will be on the other side of this difficult period sooner rather than later. However, the inescapable truth is that we do not know the duration of the immediate health peril. Reputable scientists and physicians cannot agree on its duration.

All of which means that the precautionary measures recommended by the CDC and adopted in executive order by Governor Kemp will continue for an unknown period of time.”

The Georgia Speaker of the House also addresses the right to vote as one of America’s “cherished freedoms” and it “should be free of impact from circumstances which create obstacles to its exercise.”

The May 19th primary puts Georgia over a month ahead of anyone else in the south.

On Tuesday, March 24, Raffensperger announced that the Secretary of State’s Office would be mailing out absentee ballots to 6.9 Georgia voters for the May 19th primary. This was his answer to ensuring the health of Georgia voters and poll workers during the pandemic.

In a press release issued by Raffensperger on the absentee ballots, he said,

“Times of turbulence and upheaval like the one we Georgians face require decisive action if the liberties we hold so dear are to be preserved,” said Raffensperger. “I am acting today because the people of Georgia, from the earliest settlers to heroes like Rev. Dr. Martin Luther King, Jr. and Congressman John Lewis, have fought too long and too hard for their right to vote to have it curtailed. Georgia has faced challenges before and overcome them, and we can do so again through the grit and ingenuity that has made America a shining example for democracies around the world.”

In the 2016 and 2018 November elections, around 95 percent of Georgia voters opted to cast their ballot in person versus the 5 percent who did so by mail. With social distancing as the most important tool for limiting the spread of coronavirus, providing alternatives to voting in person is crucial. All Georgia voters can request and vote an absentee ballot for any reason.

While Secretary Raffensperger is encouraging as many voters as possible to vote by mail, some rely on in-person voting to exercise their right to vote privately and securely. People without internet or mail access, such as those experiencing homelessness; Georgians who need language assistance; and people with disabilities who rely on voting machines to cast their ballot will still be able to do so in person on the state’s new voting system. Additionally, research from the Brennan Center for Justice at the NYU School of Law shows that eliminating “in-person voting could disproportionately disenfranchise Black, Latino, and young voters”. Their right to vote too needs protection.

To that end, Raffensperger is taking extra steps to limit the threat of COVID-19 at the polling place. Poll workers will receive additional resources to clean the equipment regularly. In-person voters who show up to vote in person will be instructed to maintain a safe distance when waiting to vote. 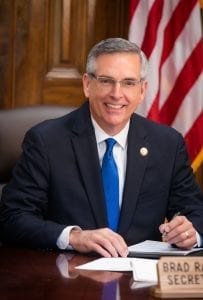 These measures will protect poll workers as well. Understanding the extra risk Georgia’s generally elderly poll workers face, Raffensperger is working to help counties hire more and younger poll workers. Extra staff will allow those who feel sick to be absent from the polls without significantly impacting continuity while a younger pool of workers will increase resiliency in the face of the COVID-19 threat.