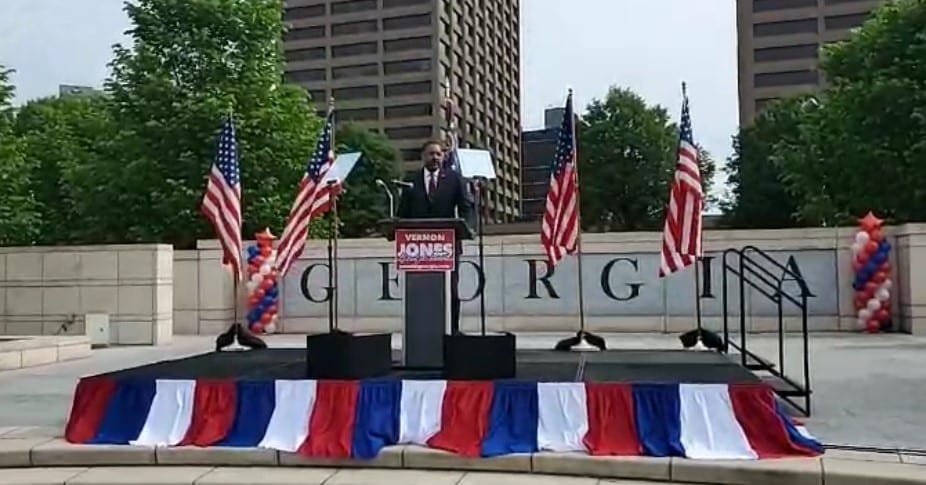 ATLANTA – Former State Representative Vernon Jones announced his intentions to run for Georgia Governor on Friday, April 16 at Liberty Park next to the Georgia State Capitol.

“This is the beginning of a movement whose time has come,” Jones opened. “For those of you who feel the incumbent Governor didn’t fight for you, a new day has dawned.”

Focused on looking past differences of North and South Georgia, race, or class, Jones pledged to bring opportunities for everyone.

Jones a vocal critic of Governor Brian Kemp recently became a Republican, perhaps just to primary Kemp. Previously, Jones denounced the Democrat Party but stated he had no plans of changing Parties. He’s a strong Trump supporter as well.

“Even sitting on the back of the truck won’t change it,” Jones remarked about Kemp’s attempts to rehabilitate his image among some Republicans.

By signing SB 202, Kemp’s appeared to win back some support from disillusioned Republican voters. It’s unclear to what extent in rural Georgia.

Jones added SB 202 didn’t address the issue of changing the election system, but he didn’t elaborate on the needed changes.

Trump’s continued to criticize Georgia elected officials including Kemp and Secretary of State Brad Raffensperger for not supporting his efforts to overturn 2020 election results. The former President promised to haunt these individuals during their 2022 reelection efforts.

So far, he’s made good on his promise, Representative Jody Hice (R-10) announced his intentions to run for Secretary of State and within hours Trump endorsed him. Trump’s floated ideas about those who should run for governor and senator in Georgia.

“Our country and our army are going to be inclusive regardless of race, gender, or orientation. We are building an army. The establishment and outlets are going to come after me. Matter of fact, they already are and you know why? It’s because they know the governor can’t beat Stacey Abrams and they know Stacey Abrams can’t beat Vernon Jones,” the former representative commented while using Trump’s attack the media and fiery rhetoric tactics.

Jones has recently spent several weekends in Mar-a-Lago and told the crowd that he sends his regards.

Jones will have for his time as a Democrat to Republican voters even though he used to describe himself as a “conservative Democrat.”

He stated that Democrats have two crows “Joe and Jim,” and they have “hijacked” the Civil Rights Movement for political gain and money. Stacey Abrams in his book is “the wicked witch of the south.”

Earlier this week, he asked that Georgian’s show him the same courtesy that they did to former Governors Sonny Perdue and Nathan Deal who also switched Parties. The last Democrat governor in Georgia was Roy Barnes in 1999.